The last ten days have been very eventful. First port of call was to a family wedding in the Cotswolds. It was a beautiful and very special occasion. The ceremony, with the couple’s two young children as ring bearers, was held on the village green, followed by drinks and canapés at bride’s parents’ place on the green. Then we followed the groom, beating a big drum to the village hall which was decked out like the inside of a marquee. We feasted on delicious food and wines and listened to amusing (and not too long) speeches. Next came kaley dancing and finally the groom and his band played sultry music, joined by guest singers. Perfect. 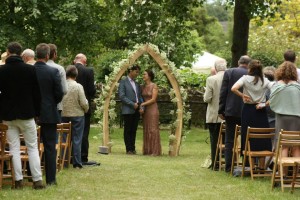 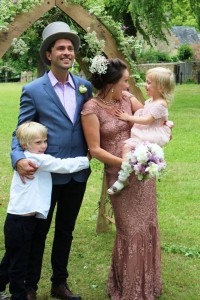 Then my work began in earnest with meetings here, in Colchester and in London, although I did find time to visit ‘Indigenous Australia’ at British Museum (my next novella is partly about this) and we saw ‘American Buffalo‘ with John Goodman, Damien Lewis and Tom Sturridge in the evening. It was surprisingly good as the reviews had been quite lukewarm. On Friday we were in Ipswich celebrating a friend’s birthday and then Saturday was the day of my participation at the Felixstowe Book Festival with Alexandra Pringle of Bloomsbury. We discussed publishing for an hour and it could have gone on much longer (no pics unfortunately). I met Esther Freud, who is published by Bloomsbury and spotted Terry Waite. While in Felixstowe, I visited the independent bookshop, Stillwater Books, which looks great. After my event I left for a party in another part of Suffolk for local friends, celebrating their joint birthdays and 25th anniversary.

Yesterday (Sunday) we had lunch with some London friends here in Mistley and C sold a painting. He is having a show at a Milan art gallery in September. I will be holding a poetry performance with Mark Brayley, Sara Rossetti (and possibly Philip Terry) at same gallery on Saturday 19th September. In early October I will be giving a talk at the Italia-Inghilterra Association in Cagliari, Sardegna and the launch for the next Patrician Press novel, Duff, by Suzy Norman will be held at Brick Lane Books in mid-October.

Now back to work.