We have had a very busy time, starting off with the launch of Robert Ronsson’s Out of Such Darkness in  Treadwell’s on 27th February which was a great success, followed by some great readings at Wivenhoe Bookshop by Mark Brayley, Emma Kittle-Pey and Phil Terry, as part of the Essex Book Festival, on Thursday 5th March. The culmination was the launch of Pudding Press at Red Lion Books in Colchester on Saturday 7th March. It was a fun event and everyone had a lovely time. The highlight was, of course, the enactment of our first book, Godfrey and the Stars written and illustrated by Mike Fryer. It was performed by Hallie and Maddie Dobinson. Hallie, aged 12, was the narrator and the Pigeon and Maddie, aged 10, played Godfrey the Gargoyle. They are the daughters of Danielle Wrayton, who has MA in Creative Writing from the University of Essex, a PGCE in Further Education from Colchester Institute where she now teaches, and she is just about to embark on MA in Games Design. Look out for more news about her soon!

Godfrey and the  Stars is now on sale at Red Lion Books and an exhibition of the wonderful illustrations is on display in the basement. A4 prints of the illustrations are available for order on request at the counter. 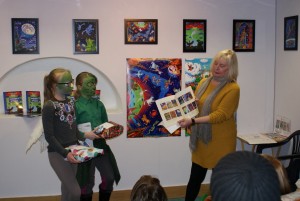 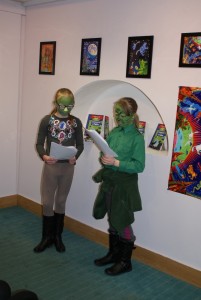 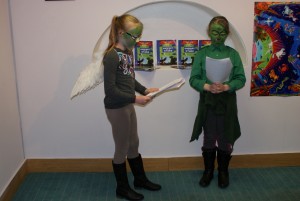 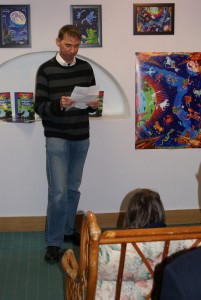 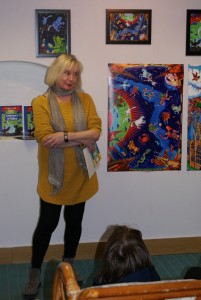