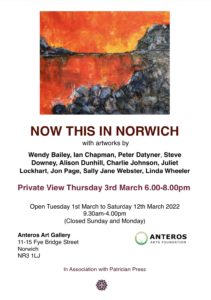 After publishing NOW THIS – REFLECTIONS ON OUR ARTS AND CULTURES in April last year, we launched the book at Anteros in Norwich at the end of June. This gave me the idea to hold an art exhibition by artists who had contributed to the book and/or who had created images for our book covers. So here we are again with NOW THIS IN NORWICH, an art show at the Anteros Arts Foundation from Tuesday 1st March next week until Saturday 12th March.

Thanks to Ian Chapman, one of the contributing artists, who lives in Norwich and who helped me organise the exhibition. He was interviewed live from his studio by BBC Radio Norfolk at 2.30pm on Thursday 24th March to talk about the show and the book. 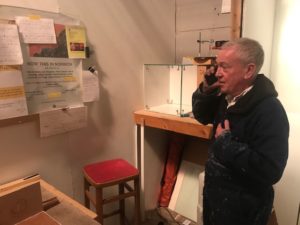 Grateful thanks also to Wendy Bailey, one of the contributing artists, who organised the radio interview.