Thanks so much to Linda Lappin for inviting me to join this writing blog tour. You can see Linda’s blog about her writing process here:

Linda Lappin is the author of The Etruscan, a gothic-inspired novel set near Viterbo, a fascinating place in the region of Lazio. Like Linda, I live in Italy half the year and enjoyed the book immensely. After I wrote to Linda to compliment her on it, we started corresponding. Another work I enjoyed by Linda was Katherine’s Wish, an account of Katherine Mansfield’s final years.

For this blog tour, I am answering the following questions:

What are you working on now?

I am trying to work on my third novel, Dorek. The novel is virtually all mapped out but I am having trouble finding the time to get down to the actual writing of it. The book is about a deaf man. I am deaf but didn’t want to make it too easy for myself so I am writing in the first-person from a male perspective. Dorek is possibly asexual, but in the past he was obsessed with Clarisse.

Clarisse is the title of my second novel and Dorek will dispel a few myths Clarisse created around herself. So, one could say that Dorek is a sequel to Clarisse and both novels are written under my pseudonym, Marianne Francis.

The book explores Dorek’s family history as well as his philosophical and political concerns. He never went to university and has never held down a proper job but he is an avid reader and has opinions on many things. The book will also describe the process of writing and how a man like Dorek, who is not a professional writer, feels the compunction to write down his thoughts and feelings. Dorek has never had a loving relationship with a person of either sex but he is very close to his best friend, Mungo who is Italian. Dorek comes from an Italian-Polish background but his true identity is revealed within the course of the book. His chance encounter with Clarisse has to remain a surprise so I won’t say too much more about it. Their meeting encapsulates one of my favourite themes. In fact coincidences occur constantly in my own life. After Dorek, my next book will be an autobiography entitled: The Book of Coincidences and written under my own name, Patricia Borlenghi.

Why is your work different from other work in the same genre?

I would say that as a contemporary novelist I like experimentation. I don’t necessarily work in an ordered, chronological way and my books certainly aren’t plot-driven. My first novel, Zaira, written under my own name was an historical novel set in Northern Italy around the early twentieth century. This did contain more of a storyline but I certainly didn’t know how the story would end. I sometimes used my dreams to advance the story and although this is a cliché, the characters certainly took over. Dorek is likewise nagging me to pay more attention to him and I wake up every morning thinking about him. I make notes about him, either handwritten or on my iPad. The iPad notes are very useful in that they are automatically sent to my email address so I can transcribe most of them. The other ways my work is different is that it is quite episodic and not necessarily time-structured, so that for instance in Clarisse, there are quite long gaps or leaps back to the past in the narrative. I have got into the habit of using poems at the beginnings of chapters. One reviewer of Clarisse said I should explore the poems more in my prose but I want them to be autonomous rather than require any further explanation.

Having studied for an MA in Creative Writing, I was force-fed the old rule: ‘show rather than tell’. However when I read other writers, e.g. Sebastian Faulks and more recently Duende by Lizzie Eldridge and The Signature of All Things by Elizabeth Gilbert, so many authors I admire do tell rather than show so I am not too worried about this in my own writing.

I write in a very simple way, possibly because I wrote for children in the past. I am attempting to share my life experiences and my thoughts with readers, rather than write great literature. Not every sentence is beautifully structured yet I hope that what I put on the page is well-written. I am interested in politics, philosophy and moral dilemmas. I write the way I do to convey my opinions, possibly to the detriment of characterisation. Some characters may be ciphers rather than real people. Tobias Hill, who was a writing fellow at the University of Essex where I undertook my MA, thought my work out of fashion and likened it to Iris Murdoch, which I found very complimentary indeed!

How does your writing process work?

I haven’t got any one fixed system. I can have an idea about a story or a character. The story is usually based on real events and characters are vaguely drawn from real people. Yet I do draw on my dreams. When writing Zaira I asked myself questions such as: what would happen to a woman born before her time in rural Italy (which is how an uncle of mine once described my grandmother) or with Clarisse: what would happen to a woman with breast cancer who had bad experiences with doctors? Or more recently: how would I convey the special experiences of a deaf man?

When I wrote Zaira, I firstly researched Italian history at the British Library in London and then when I moved to Italy, I sat down and wrote thousands of words based on the village and surrounding area where I now live. The timeless scenery and buildings evoked a vivid imagery for me. Zaira is the girl I imagine I may have been if I had been born in her time. Some chapters describe a winery I visited and an estate I often drive past. Other information about the period was gleaned from the provincial paper.

With Clarisse, written mainly in the third person except for her soliloquies and journal in the last chapter, a lot of the book is composed like a series of short stories. Clarisse is not the main focus of every chapter.

However Dorek is written in the first-person and every chapter has already been drafted. So I am being much more systematic in the writing process.

And last but not least is the process of writing, rewriting, editing and getting other people to read one’s work.

As well as writing, I am also a publisher. I set up Patrician Press just over a year ago after completing my MA in Creative Writing. The idea is to publish my own work and fiction and poetry by other authors. I am proud to say that I have already published ten e-books, four of which are in paperback and four more paperbacks will be coming out soon. Most of my authors are academics, several with PhDs, so I feel honoured to have them on my list. I have also written a book entitled Food Fetish, about a year in my life spent eating and drinking in Italy and England. The book includes recipes, illustrations and an Italian-English food glossary. Because of my Italian family background, my list certainly has an Italian flavour! I have published a fictionalised memoir entitled Faded Letters by Maurizio Ascari (a well-known Bolognese academic) who writes perfect English and Arcobaleno Rainbow, a dual-language poetry collection in Italian and English by Sara Elena Rossetti (a teacher and actor). My other titles include: Three Wishes by Philip Terry, another well-known academic and poet, and a poetry collection, Disarming the Porcupine by Mark Brayley, a performing poet, and Fat Maggie by Emma Kittle-Pey, a quirky short-story writer. Stuart Logan Brooks’ novel, NOD, the story of the dream catchers, will be out in 2015.

Also coming in 2015 is a humorous book about the differences between the English and Italians written by two academics from the Universities of Venice and Cardiff.

And the latest news is that I am setting up a children’s imprint called Pudding Press starting with a series of three books introducing children to scientific phenomena by Mike Fryer, another academic.

Please see the News/Events page for dates of future book launches in England and Italy. 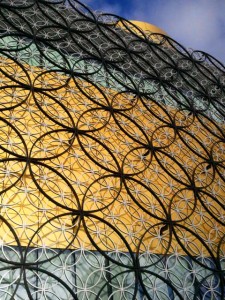 Last Thursday I visited the wonderful new Library of Birmingham so here are some photos of it to dazzle you. I have always loved libraries and my visit inspired me to write down my ten favourite libraries. I will discuss this further in my next blog. 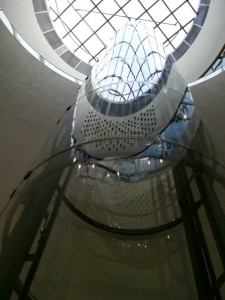 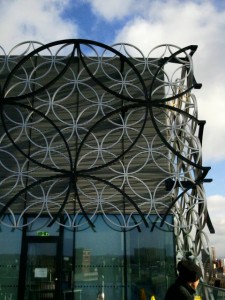 And now here are the authors who will be continuing the writing process blog tour:

Liz Fisher-Frank lives in East Anglia, England and writes fiction for and about teenagers. Drawing on her many years as a children’s rights lawyer, her novels and plays often have legal and welfare-related themes. Her successful first novel, Losing Agir about a Kurdish refugee in England, was highly praised by Cherie Blair.

Shauna Gilligan, from Dublin, Ireland, has lived in Mexico, Spain and the UK. She now lives in Kildare, Ireland, with her family. She writes short and long fiction. Her novel Happiness Comes from Nowhere (London, Ward Wood: 2012) was described by the Sunday Independent as a “thoroughly enjoyable and refreshingly challenging debut novel.”