Have had an eventful couple of weeks starting with a week-long trip to Montreal for my cousin’s daughter’s Italian wedding. There’s no direct flight from Milan so we stayed overnight in Paris and caught next morning flight from CDG. Stayed in convenient hotel near Gare du Nord and had great time shopping for presents in summer sales and dining at our old student haunt, Chartiers.

Coincidentally C’s niece, husband and their daughter live in groovy part of Montreal. They kindly picked us up as we were staying with them. Next day we all had lunch at my cousin’s together with her husband, three children and their partners, including the bride and groom.

In evening went to rock concert to see one of my heroes, Stevie Winwood. At 66 he still has an amazing voice. His band was followed by main attraction, Tom Petty & the Heartbreakers. All fab and very slick, although we struggled to keep awake at end.

Next day went  to modern art gallery to see huge show celebrating 50 years of abstract art, then we sloped down to the port where we had lunch al fresco on a canal. In evening had dinner with friends (our nephew in law’s parents).

Saturday afternoon attended wedding service at down-town United church. When we came out someone was playing piano on the ‘side walk’. A common feature during this festive period in Montreal. 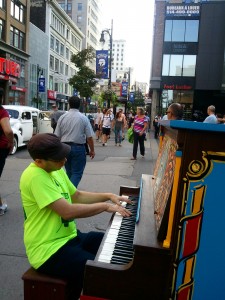 Then early evening reception at Laval for cocktails followed by lavish meal. Niece and nephew joined us for dessert and dancing. In bed by three am…

Next day another big lunch at cousin’s, joined by various family members from Washington and others hailing from our Italian village.

Monday was Labor Day and our friend took us to the market in Petit Italie where we shopped for dinner: bison, merguez sausages and halibut for barbecue, accompanied by peppers, mushrooms and tomatoes and gluten-free ingredients for blueberry cheesecake made by me for great-niece.

Next day trip to lake and charming ski resort of St Saveur.

Made our way back on metro thinking we would have leisurely time until night flight to Paris. Luckily I glanced at my emails on iPad and discovered our Air France flight had been cancelled and now booked onto earlier flight with Air Canada at eight pm. Just had enough time to get ready and lovely nephew and niece drove us to airport via secret short-cut. Unfortunately after joining the line, we were bumped off Air Canada flight by officious member of staff, even though we had even been allocated seat numbers.  We were eventually rebooked onto KLM flight to Amsterdam leaving at seven pm. Time was now 6.50 pm so we had to make a dash for it. Sprinting to the gate after manually putting our two suitcases through excess baggage conveyor. Got on plane just after seven and it took off immediately. We realised later that suitcases did not accompany us. Had smooth flight to Schiphol and then had quite long wait for Alitalia flight which arrived in Milan around 2pm next day. After contacting lost luggage desk we drove home. Had a few panicky moments and unanswered telephone calls waiting for luggage which arrived early afternoon on Sunday – after three days.

On the home front we have had water problems since March, involving leaks, low pressure and need for replacement taps. Luckily they were fitted on Tuesday, only six months’ late,  just in time for last minute clearing up before some friends arrived on Wednesday.

Whilst away, I was also trying to conduct a prospective author deal with US publisher who coincidentally happened to be in Montreal. Sadly it didn’t work out, resulting in a sublime waste of my time and energy over a book about philosophy and trade unionism, two themes close to my heart. Moral: negotiate only with authors who haven’t already sold any rights to a publisher assuming I could achieve sales of over 100,000 copies. Where? On Mars?

Other news is that I have a table at the Small Publishers Fair on 14th and 15th November to be held in Central London. I am trying to participate in the Essex Book Festival in March 2015, now hopefully at the Wivenhoe Bookshop, as Manningtree Library are only holding one mainstream event.