Kate Worsley was born in Preston, Lancashire, and studied English at University College London. She has worked variously as a journalist, a massage practitioner and follow-spot operator, and has an MA in Creative Writing (Novels) from City University London. She now lives on the Essex coast. She Rises is her first novel and has won worldwide-acclaim.

Liz Fisher-Frank lives in Dedham, East Anglia and writes fiction for and about teenagers. Drawing on her many years as a children’s rights lawyer, her novels and plays often have legal and welfare-related themes. She has an MA in Creative Writing from the University of Essex. Her successful first novel, Losing Agir, is about a Kurdish refugee in England.

Christopher Harris lives in Birmingham and France. His first novel Theodore, is the story of a gay Byzantine monk who, through a series of unlikely events, became Archbishop of Canterbury. His other novels are: False Ambassador, Memoirs of a Byzantine Eunuch, and Mappamundi, all published by Dedalus. His most recent book is Brute Art, a novel about art, natural history, food and reptiles, published as a Kindle e-book. He has family connections in Manningtree. 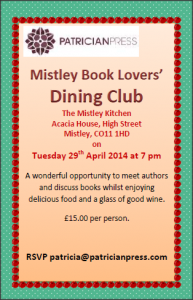