The Unseen – a detective novel 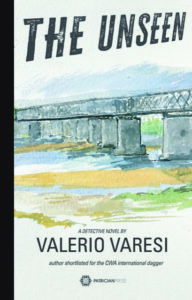 Commissario Soneri from Parma’s police headquarters is investigating an unsolved case of a dead body found in the Po River three years before. His colleagues at the time couldn’t decide if it was a suicide or a murder, nor could they establish the victim’s identity. To close the case, Soneri needs to look a little further. Yet it’s just a formality, a matter of going through the motions. Soneri, however, is not one for formalities. He can’t endure burying a person without a name, so he decides to reopen the case.

Soneri, an intelligent but apparently grouchy man, uses rather unconventional policing methods, and his partner, Angela Cornelio, a lawyer, helps him with his enquiries.

The investigation leads them to river life, where he tries to break the wall of silence, typical of small communities harbouring poachers, petty criminals and big time profiteers – even a monster in the waters of the Po River. Soneri realises that the fog surrounding the Po makes things invisible and people unseen; it changes their identities; it deceives. And sometimes it kills.

For fans of Camilleri’s Montalbano series. 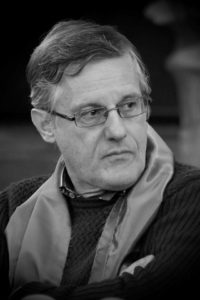 Valerio Varesi was born in Turin. He became a journalist  and is currently working at La Repubblica newspaper. He is the author of 16 crime novels starring Commissario Soneri. River of shadows was nominated for the prestigious Italian prize ‘Strega’ an …

The book is translated into English by Joseph Farrell. He is Professor Emeritus in Italian at the University of Strathclyde, Glasgow. He has translated several Italian novels including by Leonardo Sciascia as well as other novels by Valerio Varesi. Theatre works include English editions of plays by Dario Fo, Eduardo De Filippo, Carlo Goldoni and Luigi Pirandello and three film scripts by Giuseppe Tornatore. He is co-author with actor-author, Franca Rame, of ‘Non è tempo di nostalgia’ (2013) and ‘La mia vita, le mie battaglie’ (2015) with the novelist Dacia Maraini.