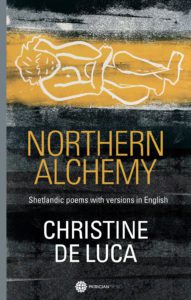 A bi-lingual collection of 40 poems, each in the original Shetlandic, along with a version in English. The poems will be selected from several of Christine De Luca’s collections along with some as yet unpublished poems.

Shetlandic is a unique ‘dialect’ or language, a blend of Old Scots with strong Norse vocabulary and sound; the most distinctive within Scotland. Nordic poets, when they hear it, describe it as a ‘cousin language’.

The cover image is by Wendy Bailey, an artist working in Colchester.

We are holding two launches for the book, one in Edinburgh and one in London: 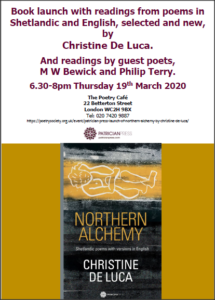 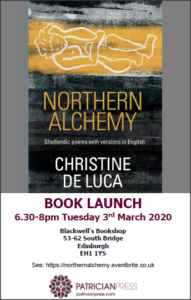 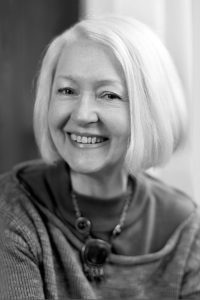 Christine De Luca lives in Edinburgh. She writes in English and Shetlandic, her mother tongue. She was appointed Edinburgh’s Makar (poet laureate) for 2014-2017. Besides several children’s stories (in Shetlandic) and one novel, she has had seven poetry …